Reporter Tim Charvat: Surface Densities is a collection of paintings by Achala Wali, a graduate from Syracuse University in 1975. Wali says that from a young age, she has always been invested in drawing.

Wali: It’s hard to say what inspired me, it’s something that I’ve always, sort of been drawn to as my way of interacting with the world.

Reporter: Wali says her paintings on display come from the past few years. When asked about the meaning of Surface Densities, Wali says the methods in drawing inspired the title.

Wali: I really do engage with the surface of the paper, and they’re very complicated and obsessive kind of lines. To me that was, color line, everything coming together to explore exploration.

Reporter: Wali says she is currently taking a break before starting her next painting. Surface Densities will be on display until August 7th. Timothy Charvat, NCC News.

SYRACUSE, N.Y (NCC News)– From an early age, Achala Wali has always been fond in all forms of drawing. One story Wali fondly remembers is when she would cry, her mother who has since passed away, would give her something to draw with, to calm her down.

Wali was born in Benares, India, and moved to the United States at the age of five.

She would graduate from Syracuse University with a degree in Visual and Preforming Arts in 1975 and would live in New York and Paris before settling down in Cleveland, Ohio in 1989, where she would continue her work, and eventually open her own studio in 2007.

Wali would move back to the New York Area in 2019 for family reasons, where she would work on her paintings. This challenging work was rewarded, as she was selected to be the one of six artists to have their work featured in the Everson Museum of Art in the Central New York Artist Initiative in 2021.

These paintings are a collection of her work from the past few years, which she calls Surface Densities. These paintings debut in 2022. The title inspired by her husband’s line of work.

“I guess Surface Densities was, here I was engaging with the surfaces with the paper, but there were many layers of work that came together,” Wali said.

Wali is currently taking a break from painting before continuing her work, as a few of her paintings in the show took years to produce.

Surface Densities is on display until Aug. 7. 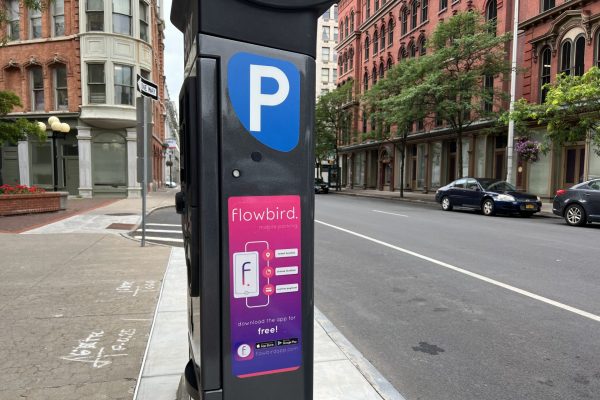