SYRACUSE, N.Y. (NCC News) — The coronavirus has now spread to the United States – and the country is on high alert.

The number of cases in the country have skyrocketed to 231 (as of Friday morning), including 22 in New York State.

Syracuse and Onondaga County leaders held a press conference Wednesday at the Mulroy Civic Center. County Executive Ryan McMahon and Health Commissioner Dr. Indu Gupta were among those that spoke.

“At present, we do not have any pending or confirmed cases of COVID19 as the county executive had mentioned, but it will happen in our community. It’s a matter of time, but we don’t know when,” Dr. Gupta said.

McMahon said it is likely that the coronavirus will come to Central New York, but the County Executive believes Syracuse is ready to respond once the first case is confirmed in the area.

“We are very, very well prepared. In Onondaga County we have a wealth of resources,” McMahon said. “We are known for our eds and our meds and certainly our meds are prepared for any challenge that is in front of us.”

Dr. Gupta mentioned how some Syracuse University students have had their abroad programs evacuated. But they can’t return to campus until at least two weeks after landing back in the United States.

“After 14 days, they will be returning and have a new semester starting,” Gupta said. “But if they are coming back to this campus or are they are part of this community because they live here, then SU is the one who is monitoring at this point and they are consulting with us on a regular basis.”

One of those students affected in SU junior Tyler VanBeveren who was aboard in Florence just last week.

Now, he’s back at his home in East Syracuse. And while he’s upset he had to leave Italy, he is happy to be away from a country that has nearly 4,000 confirmed cases.

“It was definitely a sense of relief, knowing I was going to be away from this situation that would probably cause a ton of stress,” VanBeveren said. “I was happy to hear that I wasn’t going to be involved in this hot zone that was causing such high alarm in the world.”

And to his surprise, when he landed back in the United States, he walked right off the plane and into the country.

“I landed [at JFK Airport], and I just walked straight through border control, baggage claim and I was in the U.S.,” he said. “There was no temperature check, no screenings to see if I had a fever or anything like that.”

I reached out to Kennedy Airport, who said that which passengers they screen are not decided by the airport itself, but by the Centers for Disease Control. 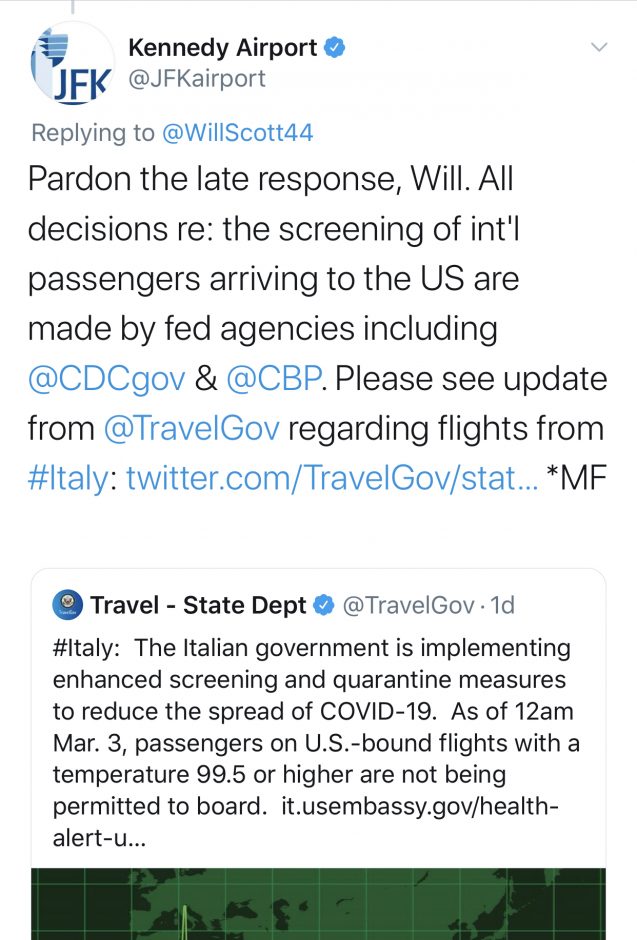 While Onondaga County does not currently have a confirmed case of the coronavirus, County Executive McMahon did say that 12 people who just arrived back from China are being quarantined. None have tested positive for the virus.