DARASHA:THE HERION EPIDEMIC HAS BEEN ON THE RISE FOR A FEW YEARS IN SYRACUSE NEW YORK.

KEVIN BATSFORD: A LOT OF TIMES THEY WILL SHOOT UP AND JUST LEAVE THEIR NEEDLES

DARASHA: WHILE KEVIN BATSFORD WHO DRIVES THE HIRE GROUND VAN DISCARDS OF THE NEEDLES PROPERLY , THE WORKERS HELP FIND THE NEEDLES EVEN IF THEY MAY BE AFRAID OF NEEDLES LIKE DANIEL MINTON SENIOR. …

DANIEL WILLIAM MINTON SR.: IT’S VERY SCARY FOR ME BUT I LIVE ON THE DANG STREET SO I’M GOING TO HELP CLEAN IT UP

DARASHA:.. OR EVEN CURRENTLY BATTLING A HEROIN ADDICTION…

JEREMY BRYAN: I ALREADY KNOW THAT I WANT TO GO DO A SHOT RIGHT NOW BUT ITS LIKE YOU JUST HAVE TO BE BIGGER THAN THAT .. PEOPLE THINK THAT I’M LIVING THIS FABULOUS LIFE AND I GET TO GET HIGH EVERYDAY HALF THE REASON I GET HIGH IS TO AVOID THE PAIN

DARASHA: AFTER LOSING HIS WIFE OF FIFTEEN YEARS TO A DRUG OVERDOSE JEREMY BRYAN HAS BEEN GEARING UP ON PATH TO GET CLEAN

JEREMY BRYAN: I WAKE UP EVERYDAY I STILL SMILE IM STILL HERE THEY LOST THERE MOM I KNOW THAT THEY NEED ME THEY NEED THERE DADDY SO HOPEFULLY WE CAN GET BACK ON THIS METHADONE AND GET BACK IN THERE LIVES …THANK GOD FOR THIS PROGRAM.. BECAUSE IF I WASN’T DOING THIS I WOULD PROBABLY BE OUT HERE PANHANDLING DOING THAT I GOT TO DO TO GET THIS MONEY FOR TO GET THESE DRUGS

DARASHA:  AND JUST LIKE BRYAN, JOE DAVIS IS THANKFUL FOR THE PROGRAM

JOE DAVIS : NOW I GOTTA DEAL WITH THIS SPICE ADDICTION.. AND THESE PEOPLE KEVIN, MR.TUMINO AT IN MY FATHER’S KITCHEN GOT ME AN APARTMENT

DARASHA: AND HIRE GROUND WILL CONTINUE TO GIVE PANHANDLERS AND PEOPLE THAT ARE HOMELESS AN OPPORTUNITY FOR CHANGE IN THEIR LIVES

SYRACUSE, N.Y. – Every Monday,Wednesday, and Friday the Hire Ground van picks up six individuals that  are experiencing homelessness and that panhandle.

The Hire Ground team then transports the individuals to job sites to work on various projects.

Hire Ground is a Collaborative partnership  with county of Onondaga and is a In My Father’s Kitchen street outreach.

On Friday the project was picking up litter around the community. While going through leaves and rubble, trash wasn’t the only thing that was found. With Heroin use among people that are experiencing homelessness rising, they found many used needles. 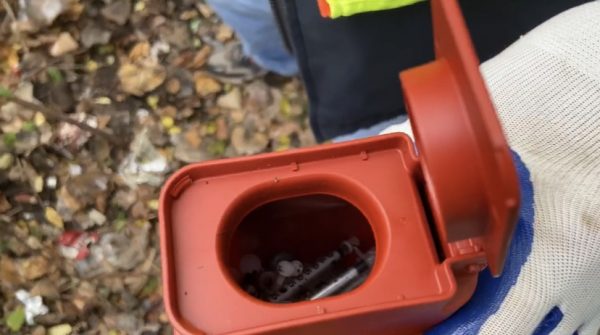 one of the missions during the clean ups is to locate these needles and dispose of them properly, so that the community will be safe of a needle incident.

Kevin Batsford, Hire Ground supervisor van drive, was once homeless and a former heroin addict. He said this program is important to show the people that are experiencing homelessness that people care.

The individuals work for five hours and get a $50 stipend as well as a lunch, coffee, and donuts, provided by the program.

” it’s more about getting to know them than it is to work.” Letting them know we are about them and we love them,”Batsford said.

Daniel Williams Minton Sr.,who is apart of the Hire Ground program, has been very afraid of needles ever since he was six years old. He went to school and came back and saw a guy who was shooting heroin before he left, had died.

” I live in the dang street, somebody has to clean it up, and I live out here so i’m going to help clean it up myself,” Davis said.

One of the Hire Ground workers i experiencing the epidemic first hand. Jeremy Scott Bryan is currently battling a heroin addiction.

The 38-year -old was born here in Syracuse, NY and had to move with his aunt at a very young age.

Bryan said when he was around the age of 18 his mom got diagnosed with cancer , so she had to take a lot of pain pills.

From there his addiction grew, from percocets to then being introduced to heroin by an ex-girlfriend.

” i’m a grown man, I make my own choice, but women are very persuasive,”Bryan said.

Bryan said he fell in love after the first shot up and ever since his life has been terror.

“My life is horrible,”Bryan said. .

“Thank God for this program, if I wasn’t doing this I would probably be out here panhandling to get money for these drugs,” Bryan said.

” i’m not a bad man for it, I just struggle with addiction ,” Bryan said.

“For the people that dont think this is a disease, there’s no way you’re telling me i would do have of this if there wasn’t something wrong with my brain chemically,” Bryan said.

Bryan does want to get back on Methadone, to get clean. Methadone is a medication that can treat drug addiction

Bryan lost his wife of fifteen years and mother of his kids to a drug overdose. After his wife passed, the family court wanted him to sign the rights over of his kids so they could have a real chance at living.

” And they were absolutely right, I think I did the right thing as a father, “Bryan said.

” I miss my kids everyday, but it just goes to show you what addiction does,” Bryan said.

Bryan said half the reason he gets high is to avoid the pain.

Bryan said hopefully he can get back on Methadone to get his kids back in his life.

another individual who thankful for the program was Joe Davis.

” I got addiction i have to deal with, i’ve had five back operations,” Davis said.

Davis said Batsford and Tumino has been a huge help. They were able to help him find an apartment and he comes out once every three weeks to help work.